When you open your Rule Tree (Dataset/Rule Tree or click the Lightning Bolt icon on your Toolbar), you open a world full of possibilities. Today we look at a couple rules found under each code within your “Attribute Field Rules”. 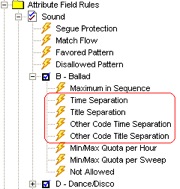 When you activate Time Separation for one of your attribute codes, you are telling MusicMaster the minimum amount of time allowed between two items with the code in question. This is set in hh:mm:ss. So if you want to keep distance between your ballads, you could use Time Separation for the Ballad code to do so. In the example below, we’re asking for a minimum of 23 minutes between Sound B – Ballad. 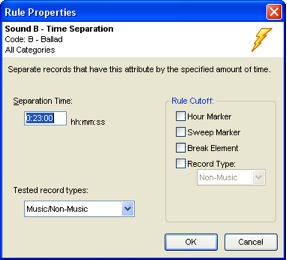 We’re also telling MusicMaster to test the Music and Non-Music items when calculating time…that way when we ask for 23 minutes of separation, it counts both music and non-music time as opposed to only counting time consumed by music elements. We’ve also indicated no cutoff for this rule. That means that we will count all items scheduled when calculating time between B codes, and that we will continue to count across the top of hour, sweep markers, Break elements, and so on.

When you activate Title Separation for one of your attribute codes, you are telling MusicMaster the minimum number of elements that must occur between plays of the same code. This is set in number of Records. In the example below we’re asking for at least 6 records to play (elements to occur) between occurrences of Sound B. 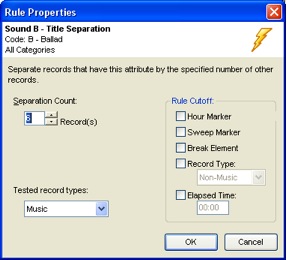 We’re also telling MusicMaster to test only the Music items when counting the records. This means we will not count items scheduled from Non-Music categories when calculating our separation count. In the example, we’re not using any rule cutoffs either.

So if time is what you’re after, use Time Separation. If you want to play X number of items between plays of a given code, use Title Separation.

Other Code Time and Title Separation 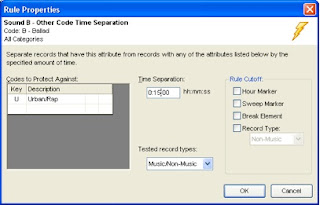 Using the various attribute code rules can help you tweak your separations and enhance your rotations.